In association with the ‘Circular Economy’ | By Camille Reed

The Northern Hemisphere’s clearly the front runner in defining what fashion sustainability means and looks like — H&M total research project investment is estimated to around 30 million euros during the four-year collaboration (2016-2020), which makes it one of the biggest and most comprehensive efforts ever for textile recycling.

Nearly a decade ago environmentalists were aware of the changes needed in apparel production and what circular economy meant for the first world continents – who are vastly responsible for the excessive production of goods-on-demand manufacturing. The modernisation of fashion consumption has replaced the notion of buying as needed and companies have enjoyed the ride for the last 25 years in one way fashion.

European fashion conglomerates (Zara, H&M, Uniqlo) in Australia take away over $380 million in sales from our consumer market. This strong customer market and affiliation with successfully understanding our local market has given these brands an opportunistic advantage over our nationally loved labels. Heavy marketing and huge investment in fashion sustainability by these companies has been happening for the past three – five years. Australian retailers should be getting out of their chairs with ears pricked because the time has come where international brands have a distinctive lead over local consumer market. According to popular ethical and sustainable shopping app ‘Good On You’, over 50% of the buying demographic is conscious of sustainable and ethical fashion. They’re ready to purchase and ready to pledge allegiance to companies that clearly demonstrate their positive impacts towards improving environmental practice.

If the big European guys have the upper hand and the extra street cred with consumers then local companies may find themselves behind the eight-ball in making change – and quickly.  Fortunately, during 2016 and 2017 conversation in the Australian marketplace had increased significantly, towards the notion of responsible, and sustainable fashion practices!

Thank you ABCs War On Waste! As no surprise, our biggest generation is now millennials and to their credit, they’ve stepped back from instant, thoughtless fast purchasing, as research from Refinery 29 and BOF recently reported. Described as the self educated generation, more and more they’ve been seeking answers from fashion businesses as to where their products come from and what can happen to them at end of life.

One of the country’s most well-known businesses, Australia Post, has already started planning potential solutions for recovery and utilising post-consumer products. The company is one of the few Australian businesses to invest time, effort and energy into how circular practices can work and financially benefit local businesses.

Andrew Sellick, Head of Environment and Sustainability, believes Australia Post has an opportunity to meaningfully contribute to the circular economy.

“Australia Post delivers to 11.7 million locations across Australia so we are well-placed to distribute purchased products back to the original maker and help them maintain economic viability,” he said.

New predictions can be forecast for a number of disruptions in Australia’s waste recovery and recycling facilitation. China has been progressively changing their environmental policies in all manufacturing industries, as a communist country the voices of the people have proven stronger than neighbouring powerful countries. China is the largest producer of textiles and supplies essentially the entire world for production. They’re also the only country to accept the largest importation of waste – including glass, paper, plastic, metal, fabrics, electrical, etc. China has the highest volume of plastic in the world, according to statistics from the Bureau of International Recycling. The country imported 7.3 million metric tons (8 tons) of plastic waste in 2016 mainly from Europe, Japan and the United States, worth billions of dollars. In 2017 they closed a number of printing and dying factories which did not comply with policy changes to ASIO dyes and other harmful toxins used in fabric printing and dying.

A mutually favourable outcome to China’s eco-stance is the ripple effect in hopefully cleansing Australia from cheap and nasty budget fashion directly imported from low quality factories and suppliers. Unforeseen outcomes from China’s zero-tolerance policy could effect how we know and practice recycling today. Big investment and development from neighbouring country Japan could be the game changer for China and the traditional waste recovery models currently operating in the United States, Britain, Australia, Germany, Japan, South Korea and other countries. Plastic imports into China have been a vital commodity for generations; the plastic is broken down into new raw materials for local manufacturers. Subsequently plastic de-polymerisation has become a lucrative industry with investment opportunities growing. Japan currently co-owns a Chinese run factory, which recycles polyester garments back into recycled polyester yarn. There’s a great deal to be excited about!

Further across the pond the Radici Group, one of Italy’s largest fibres and non-wovens producer, has cited ROI’s already after creating sustainable KPI’s from closely working with stakeholders. Through measured changes and new production methods the capability of a company to generate wealth from environmental policy changes in manufacturing, to be distributed among its stakeholders increased during the last few years (over EUR 206 million in 2016, +12% compared to 2015), and positively shifting a decrease in resource consumption, yielding a “virtuous” ratio.

“I’d say that our approach to sustainability can be summed up in these words: eco-design and the circular economy,” Angelo Radici concluded, President of Radici Group.

“One of our greatest challenges, which we are concentrating on group-wide in all business areas, is the complete recyclability of our synthetic fibres. The goal is for all our textile products to be mechanically recycled, so they become new plastic materials for technical and industrial uses.”

back home, News from one of Australia’s largest secure waste recovery businesses has seen a drop in paper over the past ten years.
In the past as one of our more lucrative commodities, the business has embraced the chance to pivot and textile waste will become a defining growth factor in commoditisation. All polyester textile waste can be fully recycled, the RPET pallets (plastic pallets) from recycled poly can be utilised in any industry which manufactures with polyester (excluding food and beverage). Textile waste will become a valuable commodity within less than ten years. 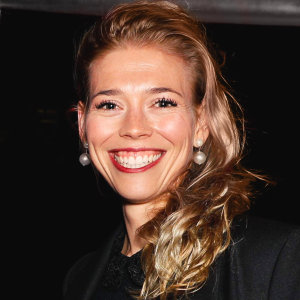 Camille Reed is the founder of the Australasian Circular Textile Association (ACTA) and The Australian Circular Fashion Conference (ACFC) – a champion on circular textile innovation in the global fashion industry. Her passion for change ignited during her previous full time role as a Textile Designer at Forever New. Not one to sit-back, Camille has seized the opportunity to educate the textile and apparel market on all things sustainable. It's her goal to see the industry transform over the next 4-8 years and re-establishing the importance of our natural environment.

Camille Reed is the founder of the Australasian Circular Textile Association (ACTA) and The Australian Circular Fashion Conference (ACFC) – a champion on circular textile innovation in the global fashion industry. Her passion for change ignited during her previous full time role as a Textile Designer at Forever New. Not one to sit-back, Camille has seized the opportunity to educate the textile and apparel market on all things sustainable. It's her goal to see the industry transform over the next 4-8 years and re-establishing the importance of our natural environment.

Acknowledging The Theoretical, Engaging The Practical